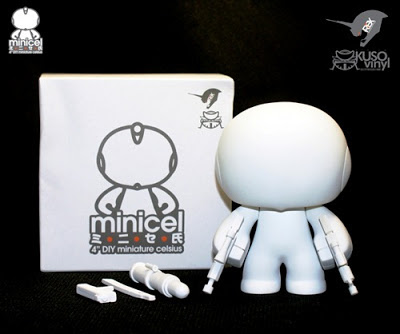 If I had the ability to draw I'd be dangerous!  I have no idea exactly why I would be dangerous, and actually I'd probably be just as mopey as I am now.  But I'm sure I could be dangerous if I wanted to.  I would draw all over toys and sell them for lots of money on the internet and then use that money to buy an alpaca farm.  Those glorified llamas are ridiculously expensive.

If I could draw I would need lots of toys to draw on, and this would be a cool one to start with.  Kuso Vinyl is adding to the DIY pool of blank figures with this Minicel.  And he comes with an arsenal.  He's begging for you to turn him into a killing machine.  This guy wil be released at San Diego Comic Con for only $10 at the Kuso Vinyl booth #5642. I'm sure you'll be able to buy him afterwards too, so don't try and get one on eBay and feel dumb when you pay too much for it.
Posted by Chris at 1:00 AM