I'm no stranger to having a large melon.  Not that it's ever prevented me from wearing hats or fitting through door ways, but I have a lot of skull.  Nowhere near this guy I used to know though, as his head was the biggest I've ever seen.  And he wasn't that smart either, so he wasn't storing a wealth of knowledge in that thing.  I think he may have been renting it out to a family of squirrels.  But even he could stand upright.

Not so much with this guy from Yoskay Yamamoto x Mighty Jaxx.  His head is so massive that he is powerless to lift it from the floor.  Only 200 of these were made comprised of a wood head and a resin body.  They will be available for preorder this Thursday, June 6th, from http://mightyjaxx.com/.

On a side note, I really enjoy the way Mighty Jaxx mixes up their releases.  You never know what to expect from them and they are really the only toy company I can think of that is completely unpredictable.  Kudos to them for making what they love and not catering to what they think people want to see. 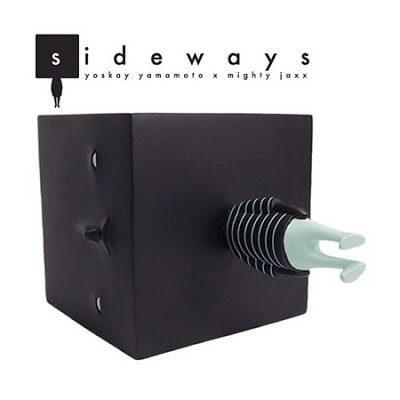