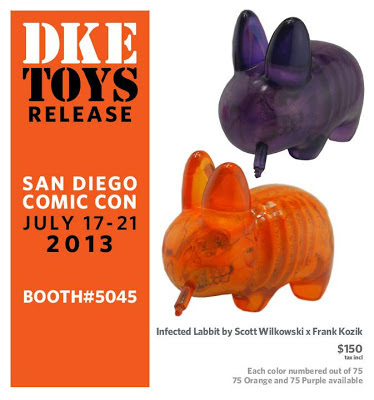 DKE always has a butt ton of exclusives when they hit up San Diego Comic Con.  They've been releasing news everyday about them, but sometimes it's just hard for me to keep up.  So I've gathered everything together that I know so far into one handy post for you.  Now begin drooling over all the things you're gonna have to have.

I'm starting things off big with this Kozik/Scott Wilkowski collaboration.  I'm not sure what these Labbits are infected with.  Maybe it's shingles.  You know, if you've had chicken pox the shingles virus is already inside you, lying dormant, waiting for the right time to make you miserable.  My father in law had it, and while he didn't become transparent and his skeleton didn't morph into an alien-like structure, he said it sucked pretty bad.  So maybe these don't have shingles, but whatever they're afflicted with they're cool and I want them both.  There are 75 of each color available and they will be $150 each.  You think that's expensive?  It's not, because those suckers can't be easy to make. 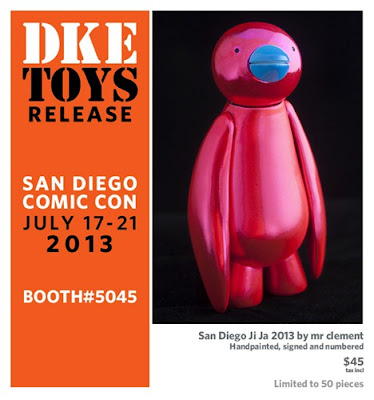 Maybe your collection is less sinister and more subtle.  That's cool, because they have something for you too.  This is a Ji Ja, and while I don't know what that means my keen detective skills tell me it is a bird-like creature ready to come home with you.  Mr. Clement hand painted 50 of these and they will see for $45. 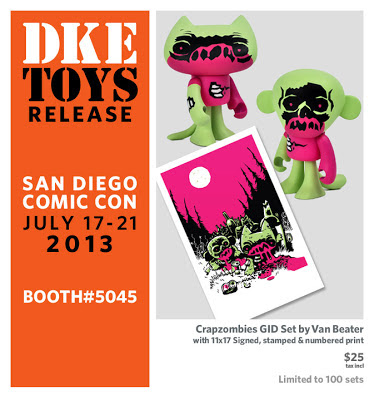 Crapzombies!  What a great name.  And what a great deal.  You get 2 figures and a signed and numbered print for $25.  Van Beater knows about value like no one else.  That will leave you with enough money to buy a $20 hot dog and $15 soda so you don't starve to death.  FYI:  if you die at Comic Con everyone will think you're just doing a Walking Dead cosplay and it will take awhile before they figure things out.  Don't die at Comic Con. 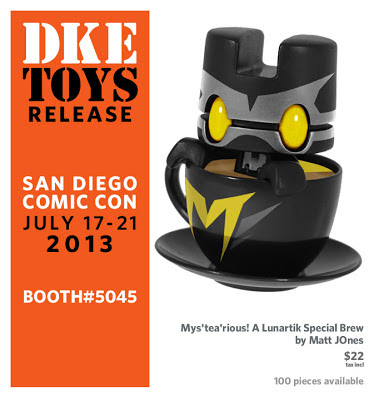 I like tea.  Sometimes I get those bottles of Nestea from the vending machines and I get about half way through it thinking how healthy I'm being and then all of a sudden I just stop liking it.  I've never drank a full one.  They kinda taste like Pepsi at first and then I think I reach the part that's good for me and my taste buds revolt.  I've spent years developing my healthy food defense system and somewhere along the way I've forgotten how to shut it off.  But I like this guy.  Matt Jones made 100 of these guys chilling in their tea cups and you can have one for $22.  Again, that's a pretty good deal.