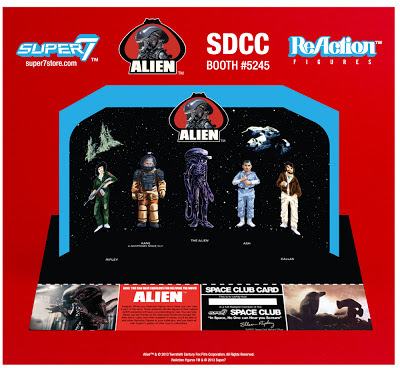 I need like 30 interns to help me keep up with all these releases for San Diego Comic Con.  And to clean the cat boxes out.  Do you think I could really get some communication majors to do my bidding for college credit?  There's tons of crap they could learn from me about being an international super star in the toy world that would obviously enrich (if not surpass) the education they're receiving.  Now I'm thinking I should charge them for the privilege.  See, this is why I can't get anything done.

Like every other toy company, Super7 is going all out to pack their booth full of good stuff.  Like the Alien figures based on original, unused designs from the 70's.  Their doing it up early bird style like the original Star Wars figures did.  Preordering these at their booth will get you a display stand, membership card, some photos, and stickers.  Then they'll mail you all five figures as soon as they're ready from the factory.  $100 will get you the set including shipping in the US.  They're $125 including shipping for the rest of the world. 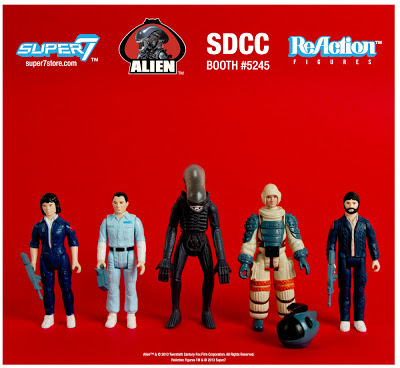 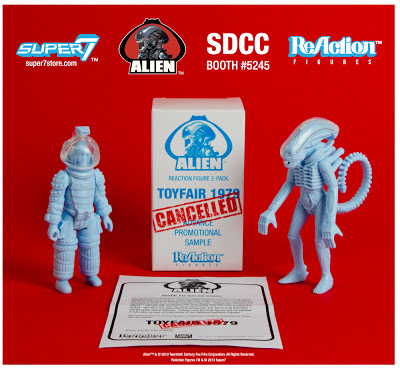 They also have these "Discovered Sales Samples" for the collector that wants it all.  They didn't discover them so much as they made them look that way, but its a pretty neat idea.  For $40 you get two unpainted figured in sweet retro packaging. 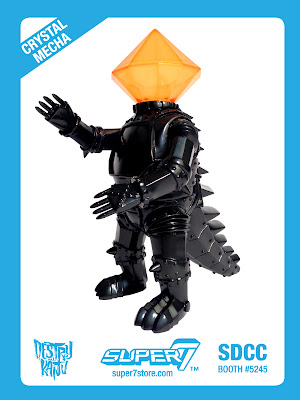 Don't worry, Aliens aren't the only thing they'll have.  Super7 is known for their array of crazy monster dudes and there will be plenty to satiate your need.  Check out Crystal Mecha, looking like Godzilla's blinged out best friend.  I'd like to see a rapper with such a need for expensive jewelry that he just replaces his entire head with a gemstone.  Try and top that one Kanye ya big dummy.  $95 will get you one of these guys, which is much cheaper than a diamond encrusted Count Chocula necklace. 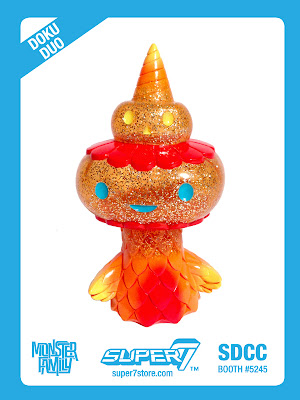 You like cute?  Heck, we all do sometimes, even though we wouldn't tell the guys in our outlaw motorcycle gang about it.  Oh the hell you would have to pay if they ever saw your My Little Pony tattoo on your butt.  Doko Duo and Foster are covered in more glitter than the men's room of a Lady Gaga show, but that's what makes them special.  You can't bring ordinary and boring to comic con.  Doko Duo will sell for $35, while Foster will be slightly cheaper at $25. 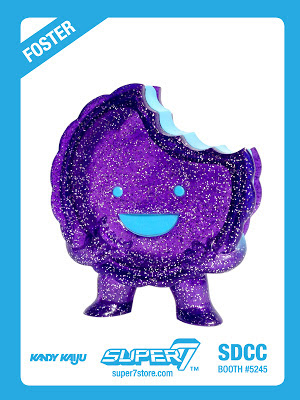 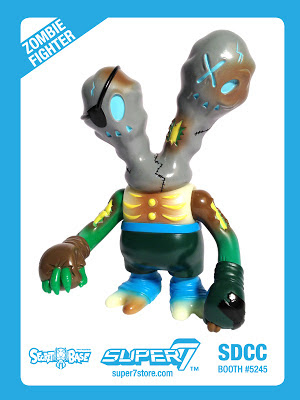 Alright, enough with the cute stuff, lets get back to something a little tougher.  Something that will make you eat lightning and crap thunder.  How about a Zombie Fighter?   Unlike most mixed parts toys, these colors work really well together and look like some actual thought went into their construction.  He can be yours to cuddle, I mean to do manly things with, for $65.

Is this all they'll have for you?  No, don't be dumb.  They'll be more and I'll tell you all about them cause I love you.
Posted by Chris at 6:17 AM